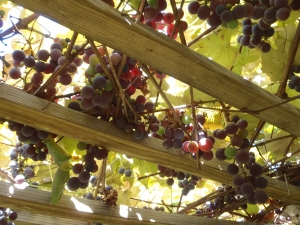 Researchers hope they will arm winegrowers with a new, natural weapon to defend their vines against both pests while reducing the amount of herbicide and fungicides used on the grapes.

The Botrytis fungus produces one of two types of infection in grapes; the first, called 'noble rot', is allowed by winemakers to partly desiccate the fruit in order to produce sweet wines while the second, called 'grey mould', destroys the fruit and ruins the crop.

The moth is native to Australia and infestations in vineyards are often associated with grey mould, since the caterpillars which feed on the vines and fruit leave wounds which provide entry points for any fungus present in the environment or carried on the caterpillar itself.

Now CSU researcher, Syed Rizvi, is in the early stages of a study he hopes will arm winegrowers with a new, natural weapon to defend their vines against both pests while reducing the amount of herbicide and fungicides used on the grapes.

"The aim of this study will be to look for the natural defence compounds produced by the vine in order to combat both the moth and the mould, and which could be used as an alternative to fungicides and pesticides in the future," Rizvi said.

The existence of a link between the moth and the mould is commonly accepted by winegrowers, with outbreaks of the moth often associated with increased incidence of grey mould, but the details of that association are not widely understood.

Rizvi said it was only by gaining a more detailed understanding of the association between the two pests that winemakers could hope to find a non-chemical means of defending their crops.

"There has only been a very limited amount of research done to prove there is a link there, and to determine the exact nature of that association," he said.

"The moth is a serious pest for winemakers, not only because of the physical damage the caterpillars do to the crop but also because of the association with grey mould.

"Australian winemakers spend millions of dollars a year on pesticides to keep the moth at bay, and on fungicides to control the grey mould at bay.

"This research will seek to identify the compounds produced by the vines to defend themselves from the herbivore pest and pathogenic fungi and will hopefully help us better understand the nature of the relationship among the moth, the mould and the plant."